Ole Gunnar Solskjaer was pictured arriving at Carrington early on Friday morning as he begins life as the permanent boss of Manchester United.

The Norwegian was finally handed a three-year-deal on Thursday on the back of an impressive spell as interim manager.

A day later made his way into United’s training base to finalise preparations for this weekend’s clash with Watford at Old Trafford.

Solskjaer addressed the media for the first time as permanent boss on Thursday, admitting at the press conference that he is now living his ‘ultimate dream’.

‘I don’t think proud is the right word,’ he said. ‘I’m happy, I’m honoured, because it’s a fresh start.

‘Now, the hard work starts. Now, it’s the hard work, the enjoyable work, so it’s not the moment to be proud in that respect.

‘You know when people get a new job and they say it’s their dream job and they’ve always dreamed about or played for that club or managed a club. That’s more to me than to anyone.

‘This has been my ultimate dream all the time. Maybe a naive dream, but I’ve always had that dream in my mind to have this responsibility for this huge, fantastic family of a football club. 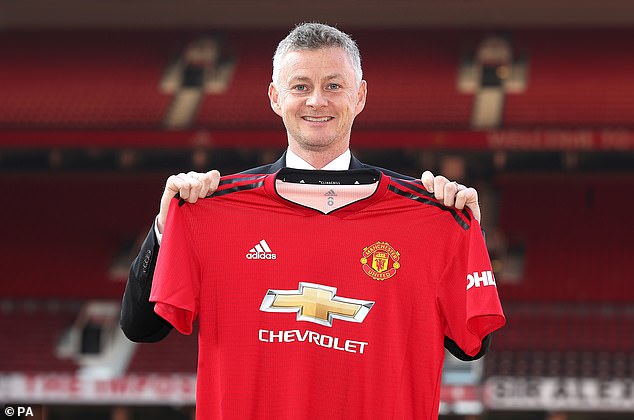 ‘I’m so honoured and privileged to be given this fantastic responsibility to lead us forward.’

United were sixth when Solskjaer took over, lagging behind their rivals following a turgid final few months under Jose Mourinho.

Since then, the Norwegian has revitalised the club and now they sit only two points off the top four.

They resume their push for Champions League football on Saturday following a two-week international break.

Solskjaer won’t have long to prepare his side to face Watford, with many of his stars having been away with their countries since their defeat by Wolves in the FA Cup.

Marcus Rashford returned to the club early after pulling out of England duty with an ankle injury.

The forward, who has shone under Solskjaer, has been working hard to regain his fitness. On Instragram he shared a video which showed him performing various exercises in his garden.

Rashford was seen lunging with a medicine ball and performing resistance work to build up strength in his ankle once more.